How Our Ancestors Formed Full Faces and Straight Teeth 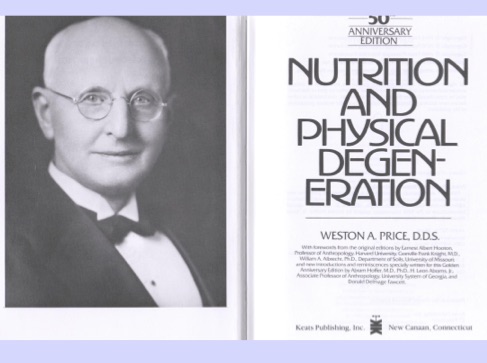 "Individual beauty is a matter of both design of the face and regularity and perfection of the teeth.

Nature always builds harmoniously if conditions are sufficiently favorable, regardless of race, color or location"

Weston Price was a dentist who practiced in the 1920s, 30s, and 40s in Cleveland, Ohio.  He was well known and well respected in his day, widely published in peer-reviewed journals.  He was the author of a textbook on dentistry used by the US Navy. He served as head of research for the National Dental Association.  He had a laboratory in his home office where he evaluated different foods for nutrient content.  He wrote prolifically and did a lot of research on the effects of root canals and systemic health effects.
In the 1930’s he travelled the world and studied all the “primitive” cultures of the world. At that time there were many pockets of people not exposed to western civilization and in particular, the Western diet of processed foods such as white flour and sugar.
He was very interested in diet and its effects on growth and development. He studied groups of Inuit, Pacific Islanders, Australian Aborigines, New Zealand Maori, Swiss Highlanders and South American Indians and he made some very astute observations. Those not exposed to the “Western” diet, what he termed " the displacing foods of commerce", as children universally had broad, attractive faces and wide dental arches with beautifully aligned teeth and no tooth decay. 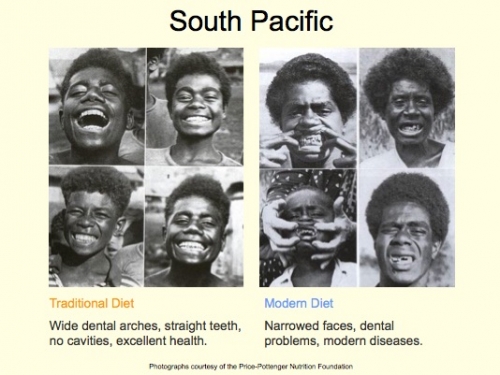 Within one generation of the parents and children consuming white flour, sugar and other nutrient-poor foods, the faces became narrower, the dental arches irregular with crowded teeth and they began to develop tooth decay. This Dr. Weston Price put down to poor nutrient absorption interfering with growth and tooth development. He also posited that this change in dietary habits encouraged the development of allergies and airway obstruction causing mouth-breathing, a change in tongue posture and the associated development of a long and narrow face.
The interesting thing was, in studying so many diverse cultures and diets he was able to pinpoint common factors in all the traditional diets that ensured that the children grew up strong and straight, maximising their genetic potential.
Every culture had adapted its diet over many hundreds of years to ensure that all of its people’s nutritional needs were being met. As a society we have come to accept a variety of different dental issues that our children have as normal or genetically based; however, as we’ve just seen, the incomparable anthropological research conducted by Dr. Price indicates that these conditions are in fact not genetic but, rather, caused by a lack of vital nutrients during the formative period of development.  This malnutrition and the ensuing dental malocclusions result from insufficient maternal nutrition before and during pregnancy, and inadequate nutrition during breast feeding, during infancy and early growth. Dr Price found that traditional cultures followed special preconception diets, often one and even two years before birth. These diets included some combination of grass-fed meats and organ meats such as liver, eggs from pastured chickens, raw milk and butter, cod liver oil, fish eggs, fermented foods (cheese, yogurt, sauerkraut, etc.), soaked nuts and freshly prepared grains, and fresh fruits and vegetables. These foods supplied important nutrients essential for proper infant development such as vitamins A, D, E, and K2. The narrowing of the face that occurs after a population has abandoned its native diet and embraced Western processed food continues to perplex the medical and dental establishments, which just can’t seem to make the connection between food and physical development. In Dr. Price’s day, scientists blamed lack of facial development on “race mixing,” a premise that Dr. Price soundly denounced. Today orthodontists blame crooked teeth on everything from genetics to thumb sucking to soft foods—that is, everything but the obvious decline in nutrient density in modern diets. Dr. Price’s studies led him to the conclusion that facial narrowing took place primarily when the three fat-soluble vitamins (vitamins A, D and the X Factor, now recognized as vitamin K2) became deficient in the diet, and modern science is beginning to prove him right. Researchers have shown that in rats, vitamin K2 deficiency during pregnancy results in “facial dysmorphology.” Vitamin K2-dependent proteins concentrate in the nasal septal cartilage of the fetus. In humans, if vitamin K2 is not present in adequate amounts, or is blocked by drugs like warfarin, during the critical period of six to nine weeks gestation, the cartilage calcifies prematurely, resulting in “maxillonasal hypoplasia,” that is, underdevelopment of the maxilla, the bone that determines the shape of the middle third of the face (Australian Dental Journal 1994;39:2). Vitamin K2 depends on vitamins A and D for signaling, so all three vitamins are involved in the process of facial development. These discoveries point to the important of preparation for pregnancy with nutrient-dense foods, in order to build up stores for the critical early weeks of fetal development. Adequate spacing of children allows a mother to replenish these stores before the next child.
The common solution to dental deformities is to cosmetically straighten teeth with braces. However, even with orthodontics, there is a limit to the structural corrections that can be made. They are plagued with allergies, asthma, and even diseases that were formally associated with adults, like cancer and arthritis. More children each year are diagnosed with learning disabilities. Up to 20% of known pregnancies now result in miscarriage. if they can conceive. They suspect the actual number is much higher because many miscarriages occur very early in pregnancy, before a woman even knows she's pregnant. There are more and more birth defects reported each year.
Just as we saw in the photos taken by Weston Price, these children show evidence of physical degeneration.  Notice the lack of vitality in the boy, and the narrowing of the jaw lines.
The combination of "deviated nutrition" and environmental toxins either medically or dentally inflicted without doubt --a sobering challenge stands before us. 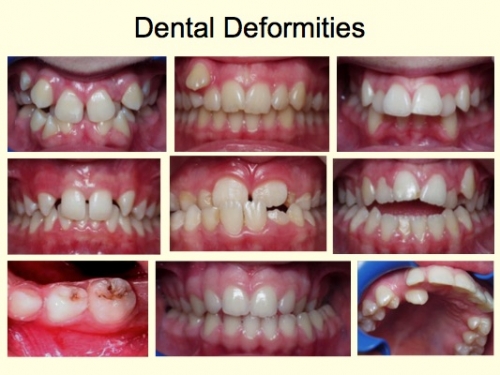 While we can create a beautiful-looking smile, braces do not address the underlying cause of crowded teeth, which is a lack of proper nutrition and both oral and body posture. These “bad bites” have been correlated with local symptoms such as neck and jaw pain, headaches, ear, nose and throat problems and sinus infections, as well as loss of hearing acuity. Disturbances to the brain and nervous system are also characteristic of this “great imposter” TMJ syndrome, including learning and behavioral disorders, sleep apnea, chronic anxiety and depression.
Yet, depending on how early a child is nourished adequately, many of these conditions can be reversed or improved.  While it is never too late to institute changes, the earlier the better – the most ideal period being before a child is even conceived.
Even with a perfect diet and our best attempts there are some habits that can result in distortion of the dental arches and facial asymmetry and needs to be assessed and treated early. Read Here....

From our perspective the Orthotropic approach is ideal in reclaiming our genetic potential.

We all want the best for our children physically, mentally and emotionally. These are some tools you can use to help your child reach adulthood with a well-developed trouble-free dentition and a physically and mentally strong body.

Give your child the best start in life?